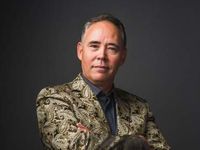 POSTPONED - Tim Tamashiro: When You're Smiling

POSTPONED due to COVID

Tim Tamashiro is a jazz evangelist. He supports jazz artists throughout Canada and around the world and he participates as a singer. Tim was the host of Tonic on CBC Radio 2 for 10 years. He’s a passionate believer in jazz as the ultimate music education and he also believes that the spaces between songs are as important as the music. Stories matter. Stories can make songs even more compelling. In 2018 Tim unveiled a new show called When You’re Smiling. Frank Sinatra, Dean Martin, and Sammy Davis Jr were the lead members of The Rat Pack; an informal group of entertainers centered on the Las Vegas casino scene in the 1960s. When You’re Smiling is a celebration of their friendship. Their songs. Their stories.