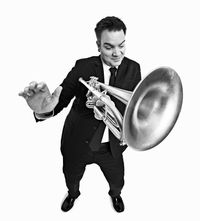 Johnny Summers is a multifaceted musician as a vocalist, trumpeter, arranger & composer. He has worked and performed with a number of award winning artists including Ellis Marsalis, Tommy Banks, and Maria Schneider.

As a recording artist Johnny has toured internationally, is the director of the Calgary Jazz Orchestra and is the recipient of 10 global music awards and numerous nominations. His seventh studio album, Baker’s dozen was released in 2020, as a debut for Cellar Music group.